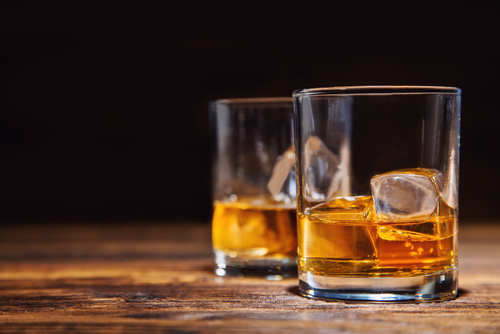 Today I'm with Angela Sanchez, the owner of the hottest liquor store in central, L&S Depot. We're going to talk about TABC laws, sample a little wine and champagne for the holidays, and talk open containers.

If you've wondered what kind of wine to get for a gift, watch us!

[Alex]: We've got to do our disclaimer! As the owner of a liquor store, as an attorney, do not drink and drive if you're going to enjoy yourself, Uber because hiring me is really expensive.

[Angela]: We're going to start off with my favorite champagne, Ver Clicquot, and the way to pronounce this is actually "Verb Click Clo".

[Alex]: I won't be able to do that, but I will be able to enjoy it. So tell me about champagne.

[Angela]: Sure! This one was invented in 1818 by Madame Clicquot of a woman.

[Alex]: Yeah, like all good things invented by a woman!

[Angela]: Definitely! We're going to cut to it and we're going to talk to you guys about the correct way to open champagne.

[Angela]: There is! I mean don't get me wrong, Champagne is fun and you guys can open it however you want but the least amount of noise that you make is actually better for the champagne.

[Alex]: Alright, so totally not what you think of when you're popping bottles, right?

[Angela]: Right! So not Vegas-style! Just twist very slowly. You want to let the bubbles sit and let's take a smell a bit.

[Alex]: And what am I looking for?

[Angela]: You're looking for a kind of a fresh berry smell. Then we're going to go ahead and pair it with a berry because that's what it would actually taste really well with, so choose the berry of your choice.

[Alex]: I lived on five acres as a kid and we used to have this little blackberry bush so I'm going with this blackberry.

[Angela]: I'm going to go with the raspberry, let's cheers and then take a sip.

[Alex]: Sip and then berry? I feel so fancy!

So champagne on a budget?

[Angela]: Champagne on a budget; this is actually not champagne, it's called a Prosecco. You can only call a champagne, champagne if it's from Champagne, France. Just a little side note.

This is a Prosecco and you've probably seen it in your local stores, but we do carry it at L&S Depot and it is sweet, it does bring out a lot of the flavors of fruits as well and would pair very well with any kind of these berries.

[Alex]: Obviously as an owner of a liquor store, you ought to get a license and how long did that take you?

[Angela]: Well from start to finish it took about a month and a half.

[Alex]: That's typical. With TABC, you have to apply for a license and the individual has to apply for it, takes about 45 to 60 days.

Do you know, if you purchase a business with a license, can that license be transferred to the new owner?

Now the other thing is can you get your license taken away? That's an easy one.

[Alex]: Yes, if you violate any portion of the Alcohol Beverage Code, you are in big trouble and they could take your license away. This rule is especially relevant for bars because if you over-serve or your bartender over-serves or anything like that, that could be a criminal offense.

I just saw some cases come through with some bartenders who served a drunk guy three extra shots of tequila, there was an undercover in the bar and they arrested the bartender for serving an intoxicated person. The statute actually says intoxicated or insane, I don't know what that looks like but don't over-serve because it could be a misdemeanor offense.

Now with TABC, do you know they can come in and search your premises at any time? Any peace officer including your regular El Paso PD as well as a TABC officer?

[Alex]: Let's talk about BYOB. There are BYOB places here in El Paso, Sunny's Sushi is one of my favorites. Bella Sera that we were at yesterday also allows BYOB wine. Here's the deal with TABC and BYOB places, if they have a beer and wine permit, you're good to go, if they allow it.

They can charge a corking fee or something like that, usually $5-$10 dollars that kind of thing, but if they have a mixed beverage permit or a special permit, you cannot BYOB. So any place that serves liquor, nope, not at all. If they don't have a permit, they can also allow beer and wine on the premises in certain situations.

As far as the special permits go, you have some breweries that bottle their own beer and you can take it in a growler, those are fine. You can take that stuff home and you can also cork or re-screw on the top of your wine and transport that too.

I know you brought this amazing bottle of wine to share with me but talk to me a little bit about buying gifts, if you want to find a wine for a particular person, what's a safe wine bet? Just tell me all about wine.

[Alex]: If you're buying a gift, what is the most popular wine? Can you give us some advice on that?

How do you pick? And what questions do you ask your waiter?

[Alex]: Thats for whites, right? What about red wines?

[Angela]: A sweet red would be something like and it's actually a craze right now, we carry it at the store but the Stella Rosa Black is a really good sweet red wine and then you have the driest, which is like a Merlot. So that's the broad spectrum, something in between is something like this Cabernet. I already opened it because I want to let it breathe but I'm going to pour you a glass and you can try this, this is my favorite wine.

[Alex]: This is the boujee wine, but if again, you're on a budget or want to just walk into your store and get your expertise, what kind of things do you have as far as wine?

[Angela]: So we have everything! Ranging from a $6 bottle of wine to a $100 bottle of wine. Seriously guys, come in and check us out; we have a wide variety of wines that you guys can select from.

[Alex]: I'm huge about shopping local, supporting local, supporting women business owners, and the cool thing about L&S Depot is, this beautiful lady is there all day, every day. So if you roll in or give her a call, she's gonna have recommendations for you for wine, for liquor, for tequila, for rum; I just bought a bottle of rum for my business coach (who won't watch this because he doesn't have social media) and she told me exactly what to get at the right price point.

How in the world do we get to transfer open containers? Because you're going to transfer that handle of vodka to the party or you're going to cork that wine and take it back home to enjoy, that's allowed in Texas. The only rule is: you can't have an open container in a passenger area of a vehicle. You can have it in a locked glove compartment, you can have it in the trunk, or if you don't have a trunk, let's say you have a truck or something like that, you can have it behind the rearmost seat, the back seat as long as it's behind there, stored and out of your reach, you are good to go.

Party buses are exception, if you own an RV, obviously, that's an exception.

What kind of punishment, do you know, if you get caught with an open container in your car?

No open containers. No driving after you've been drinking. I'm getting a ride home, as are you, we already made arrangements if we're gonna enjoy; but the deal is, an open container, if you just have one, you get caught with a bottle of wine in your passenger area of the car and you're not drunk, it's going to be a Class C misdemeanor up to a $500 fine.

[Angela]: So this wine was founded in 1972 by Chuck Wagner and his parents, Charlie and Lorna, this wine is very dark in color but very rich in flavor.

Do you do like special gifts? Things for Christmas? I know you showed me some of that stuff but if you say, "I need to get one for my boss, this is what I know he/she likes, can you put something together for me?"

Do you do that?

What are the things they do not carry that you do?

So back to the Lawyer Talk, did you know that there is no law that states someone has to show their Texas driver's license to get alcohol?

[Alex]: Yeah, she didn't know because she's a good liquor store owner and she cards everybody, but there's no law that says that that's how you have to present or prove your identity. But because liquor stores and bars are liable anytime they sell to a minor, policy is going to be "Card Everybody."

What happens if you sell to a minor?

If you sell to a minor and you're not carding, you're probably going to be liable. But if you sell to a minor and they have, we call it "misrepresented themselves," that's the legal term (Fake ID, or something else like that, you won't be. If they misrepresent themselves, it's not on the liquor store owner or bar, it's on that individual. And not only will they get in trouble for that, but they will probably get in trouble for forging that license, which is a felony criminal charge.

What else should we know about wine? Any final thoughts? And tell them how they can get in contact with you!

[Angela]: The first thing that you guys can do is make sure you come and check out L&S Depot, like our page.

One last thing that I can say about wine is don't forget that it's really important when you share a cup with somebody, that you look them in the eyes and you say "cheers."