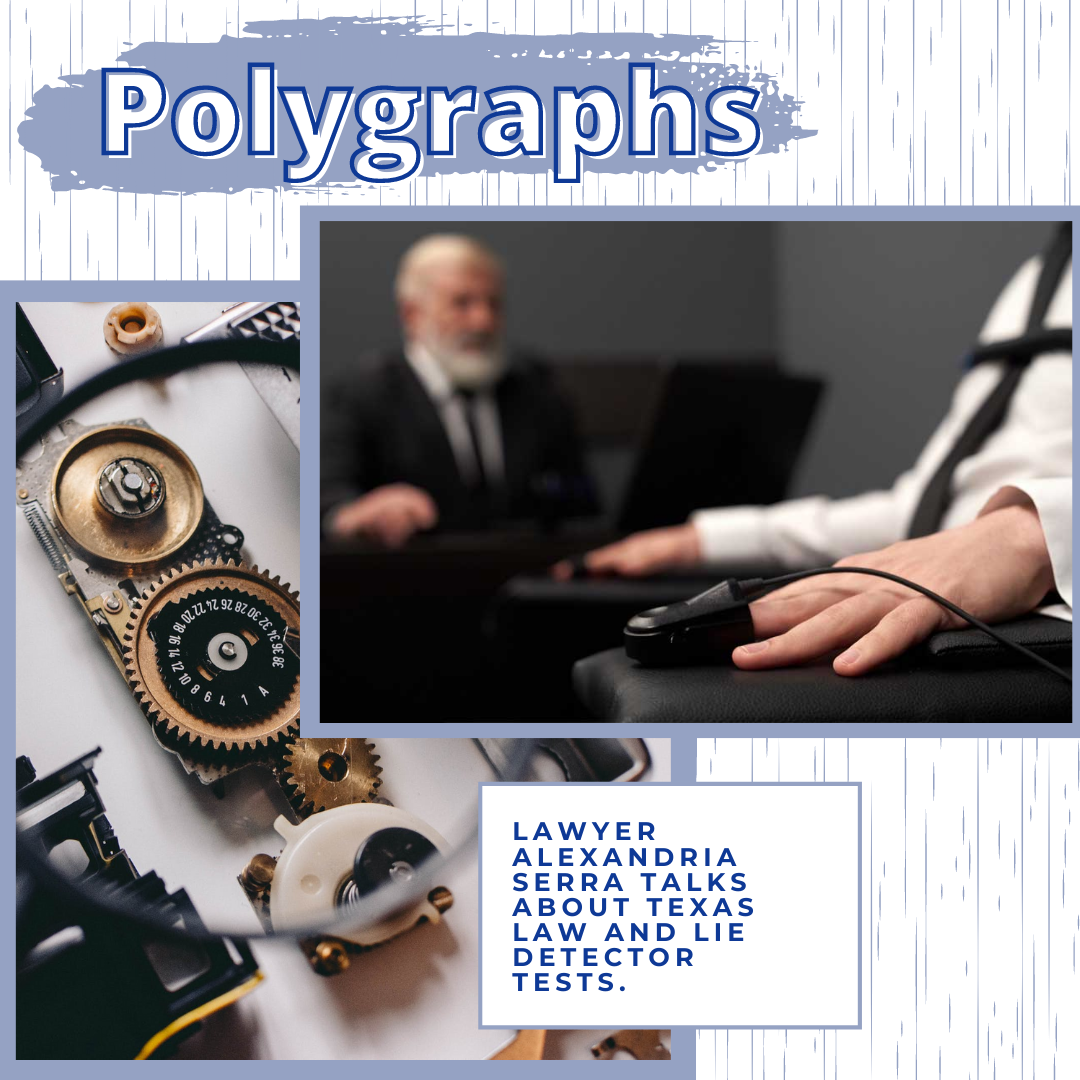 Scientifically, polygraphs are more accurate than eyewitness testimony. Yet, their results are not admissible evidence in Texas Courts . . . but anything you say in that post polygraph interview might be. Why is that?

You’re about to find out because we’ll be talking about all things polygraphs! In the movies, it looks like the polygraphs are the end-all-be-all of guilt-innocence. They're NOT, that's just Hollywood! Remember, just because you watched my #LawyerTalkThursday Instagram video on polygraphs, and now you know what an examiner is looking for doesn’t mean that you’ll be able to cheat your way through a polygraph.

What is a polygraph?

A polygraph is a process that includes a test and a device that tests your physiological response to a series of questions, it's also known as a lie detector test. It comes in three stages:

During the data collection phase, the measurement device reads your blood pressure, pulse, respiration, perspiration, skin conductivity, and any movement or fidgeting that occurs while you answer questions. Changes in these things indicate that you may be deceptive. With all those variables to keep straight, I laughed when 70% of my Instagram followers said that you could beat a polygraph. Yeah, right!

Do you think you can beat a polygraph?

Be honest and check it out for yourself. If you Google pictures of a polygraph test, you'll see that you'll be strapped up to the machine with sensors on your stomach and your back, a blood pressure cuff on your arm, something measuring your pulse, sensors underneath your palms to measure your perspiration, and sweat and movement pads underneath your body and sometimes on your feet. Good luck!

I know some of you are saying, "Google says I could beat a polygraph." Well, not with a trained examiner. Scientifically, most techniques like screaming in your head, fidgeting, toe-tapping, biting your cheek/tongue do not work to fake out a trained polygraph examiner.

The biggest issues with polygraphs are their reliability and consistency because the trained examiner, whether a newbie or an expert, really matters, and in the way that they measure deception, so you're not going to be scored on a polygraph, there's just going to be three results:

The problem is when they're measuring these responses, examiners can't tell what type of lie it is. Was it an omission? Was it a white lie? Was it a big lie? So the definition of deception is up in the air until they get to the post-polygraph interview.

As an example, let's say they ask you, "have you stolen anything in the past two years?" and you answer no, but you're lying. They don't know whether it's you stole a stick of gum out of your mom's purse or committed $100,000 of insurance fraud.

Guess what will happen next? Now, you're sitting there, all the sensors are off and the examiner is going to ask you about that spike, that indicated lying, in the post polygraph interview.

The results are in!

If there’s no deception indicated, the examiner will tell you that you did not pass the test. That’s wild, right? Same thing if they have no opinion about your deception. You did not pass. On the other hand, if the examiner found some trace of deception, examiners will say “deception indicated” and then ask you about each of those indicator spikes that went off during your polygraph. In most cases, people spill their guts.

When you start spilling your guts, everything you say becomes admissible evidence assuming, in the pre-interview, they read you your Miranda rights and, under Texas law, record your statements.

If you've been asked to take a polygraph, it’s usually for one of three reasons:

My advice: do not take a polygraph. Never agree to a lie detector test because it's too big of a risk. The fact that you refused the test or asked for a lawyer can never be used against you in court.

And, even if you "have nothing to hide," taking a polygraph is a waste of time because it's not admissible evidence to "prove" your innocence. Don't take the risk!